I’ve started playing with Dotnet Core and Docker and have had a few issues getting started. I’ve had a little bit of experience with Docker, though only a little. I’ve worked with DotNet previously but never with Core.

The setup I’m using is a Windows laptop running Vagrant. Via Vagrant I’m running an Ubuntu Virtual Machine with the Docker run time installed. Feels a litle like inception.

The key problem that I’ve had getting started was having my Docker container not responding correctly to my curl commands. I get this:
curl: (56) Recv failure: Connection reset by peer
curl: (52) Empty reply from server
Given that I’m not all that familliar with Docker or Dotnet Core I decided to remove one of the variables and set up a simple Express app in a different docker container. This validated that the commmand I was using to run the container (docker run -v /vagrant/dotnetcoretest/src:/src -p 5000: 5000 -d dnctest dotnet run) was binding the ports correctly.
This left a problem with the Dotnet Core web api app. I was surprised that this would be the problem given that I had created the app with the dotnet new webapigenerator.
Searching around I found that the problem was that by default Kestrel listens on localhost:5000. To fix this add .UseUrls("http://*:5000") to the WebHostBuilder in Program.cs. It should now look like
Rebuild the app and run curl localhost:5000/api/values and you should get ["value1","value2"].
docker dotnet core Empty reply from server kestrel Vagrant Windows

Popular posts from this blog

June 21, 2019
"Hi I'm Klee." "What do I do? Well... I'm trying to coin to term Middle Stack Developer." was the way I introduced myself across my time at Web Directions Code this past week. I like the idea of calling myself a Middle Stack Developer because I don't like the term Full Stack Developer. I don't believe that one person is able to fill out all the roles of a software delivery team. No, not even with so many companies providing SASS solutions that effectively provide specialists as a service.  What's a Middle Stack Developer? A general purpose developer, a willing generalist, someone who is happy to work across the the scope of software deployment and delivery while acknowledging that there will be places where they need to differ to a specialist.That is to say I can work in the browser but need someone to help me make things accessible and beautiful. I'm comfortable with Cloudformation but you'll need someone else to make your AWS instance …
Read more 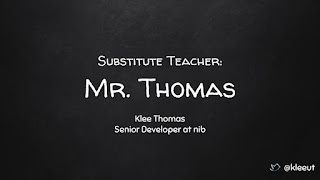 The following is a rough transcript of the talk I gave recently at the Newcastle JS meetup.  With the title JWT for 5 year olds.
This was one of the most fun talks I've put together and one that I hope everyone enjoyed.

Lets start with a story.


Millie has baked too many cookies and decides to take them to class. So she puts them in a box.
She takes the box to the teacher and says "Miss! Miss! Miss! I baked some cookies, can I hand them out to the class?"

The teacher looks at the cookies and says, "No! No you may not. If you want to hand out these cookies you need a note from you parent"


Millie runs out to the car and gets her father to write a note.


Millie takes the cookies and the note back to the teacher and asks "Miss! Miss! Miss! Here's my note, can I hand cookies out to the class?"

The teacher looks at the note and the cookies and says, "Yes! yes you can. This note says you can hand out coo…
Read more